After three years of virtual meetings due to the Covid-19 pandemic, the UEGW, one of the biggest Gastroenterology congresses worldwide, returned in a face-to-face format in the beautiful city of Vienna from October 8-11. With 10,813 registrants from 116 countries and 80% of them attending the meeting in person, there were a lot of opportunities for lively and interesting scientific discussions but also for meeting old friends and networking with colleagues from all over the globe.

Inflammatory bowel disease, as expected, was at the forefront of the novel knowledge shared by rising stars and renowned experts with the wider gastroenterology community. Subsequently, intestinal ultrasound (IUS), whose value has been increasingly recognized regarding the optimal management of these challenging conditions, was not absent from the congress, and several studies with important results and intriguing implications were presented.

The first significant study involving IUS was "INTESTINAL ULTRASOUND AT IBD DIAGNOSIS PREDICTS MAJOR DISEASE EVENTS – A COPENHAGEN IBD COHORT STUDY" from Denmark. It was expertly presented by Gorm Madsen, who was awarded the best poster presentation in his group. Its results demonstrate that IUS activity at diagnosis of IBD seems to have the capability to predict short-term disease outcome, a finding of great clinical significance as it could help us identify in time specific patients at higher risk for a more severe course and allow for early aggressive and effective treatment.

Another crucial study came from Japan. Its title was "EARLY REDUCTION OF BOWEL WALL THICKNESS BY TRANSPERINEAL ULTRASONOGRAPHY PREDICTS BIOLOGICS-INDUCED DEEP REMISSION IN ULCERATIVE COLITIS" and was presented by Shintaro Sagami from the group of Prof. Taku Kobayashi. It shows an excellent value for the use of rectal bowel wall thickness measurements as a predictive tool of future biologics-induced deep remission in UC.

Working on a similar concept, the Norwegian study by Horpestad et al., presented by Kim Nylund and titled "THE THICKNESS OF GASTROINTESTINAL WALL LAYERS MEASURED WITH ULTRASONOGRAPHY PREDICTS CLINICAL ENDPOINTS IN CROHN’S DISEASE" clearly exhibits that in Crohn's disease patients with endoscopic activity had increased relative thickness of the submucosa and reduced relative thickness of the muscularis propria as shown by IUS. In the group with endoscopic activity, the mucosa and muscularis propria were thicker in patients with a poor prognosis. This, in turn, strengthens our belief that IUS may serve as a valid alternative to endoscopy in IBD for identifying difficult-to-treat cases.

Moreover, concerning the topic of IUS as a monitoring tool for novel therapeutics, the STARDUST trial, which is spearheaded by a lot of IBUS members and is a phase 3b randomized trial comparing treat-to-target (T2T) strategy vs. standard of care (SoC) in patients (pts) with Crohn’s disease (CD) treated with ustekinumab (UST), incorporated intestinal ultrasound (IUS) for the first time as an exploratory endpoint, had some of its primary results presented by Bram Verstockt. These show that exposure to ustekinumab is not linked to changes in bowel wall thickness but is associated with transmural remission in Crohn’s disease. Further validated IUS scoring systems from large (randomized) studies are clearly needed to address the full extent of the relationship between treatment options and IUS results.

There were also other reports of interest concerning IUS from the congress, such as its use in a GETAID cohort study by Fumery et al. about the "EFFECTIVENESS AND SAFETY OF RISANKIZUMAB INDUCTION THERAPY IN PATIENTS WITH CROHN’S DISEASE", which is of major importance as risankizumab promises to be one of the most impactful new treatment options available in the near future. Furthermore, there were additional reports showcasing the potential of IUS as an effective monitoring tool. "CORRELATION BETWEEN ULTRASOUND AND ENDOSCOPIC SCORES FOR ASSESSING INFLAMMATORY ACTIVITY IN CROHN'S DISEASE" from Spain, "CONTRAST-ENHANCED INTESTINAL ULTRASOUND: TIME TO REFRESH THE NON-INVASIVE MONITORING IN CROHN’S DISEASE" from Portugal and "RELATIONSHIP BETWEEN INTESTINAL ULTRASOUND, FECAL CALPROTECTIN AND HARVEY BRADSHAW INDEX IN THE ASSESSMENT OF INFLAMMATORY ACTIVITY IN CROHN'S DISEASE" from Montero-Moreton et al. are all studies communicating effectively the fact that IUS is quickly becoming an established and valid option for evaluating inflammatory activity, especially in Crohn's disease. Finally, there was even a study from Germany about "PARAMETRIC IMAGING WITH CONTRAST-ENHANCED ULTRASOUND (CEUS): A NOVEL APPROACH TO ASSESS SMALL BOWEL MANIFESTATION IN SEVERE COVID-19 DISEASE", which highlights that IUS may be a window to better assessments of all kinds of conditions that may affect the small bowel.

We should never forget, though, that despite the congresses being an opportunity for knowledge acquisition, first and foremost, the old proverb says, "All work and no play makes a dull boy." Hence, to avoid this, IBUS organized for its members a get-together “Sounding (IB)US out" at the restaurant “The View” on the night of Sunday, the 9th of October. The attendance exceeded all expectations, and amid plenty of drinks, the young and more senior members of IBUS had the opportunity to have fun, meet friends and discuss our organization's exciting future!

At the end of the Congress, we had to say our goodbyes, but we renewed our arrangements to meet at the upcoming ECCO Congress in Copenhagen, which will take place on 1-4 March 2023. Thus, we look forward to catching up with you on that occasion! 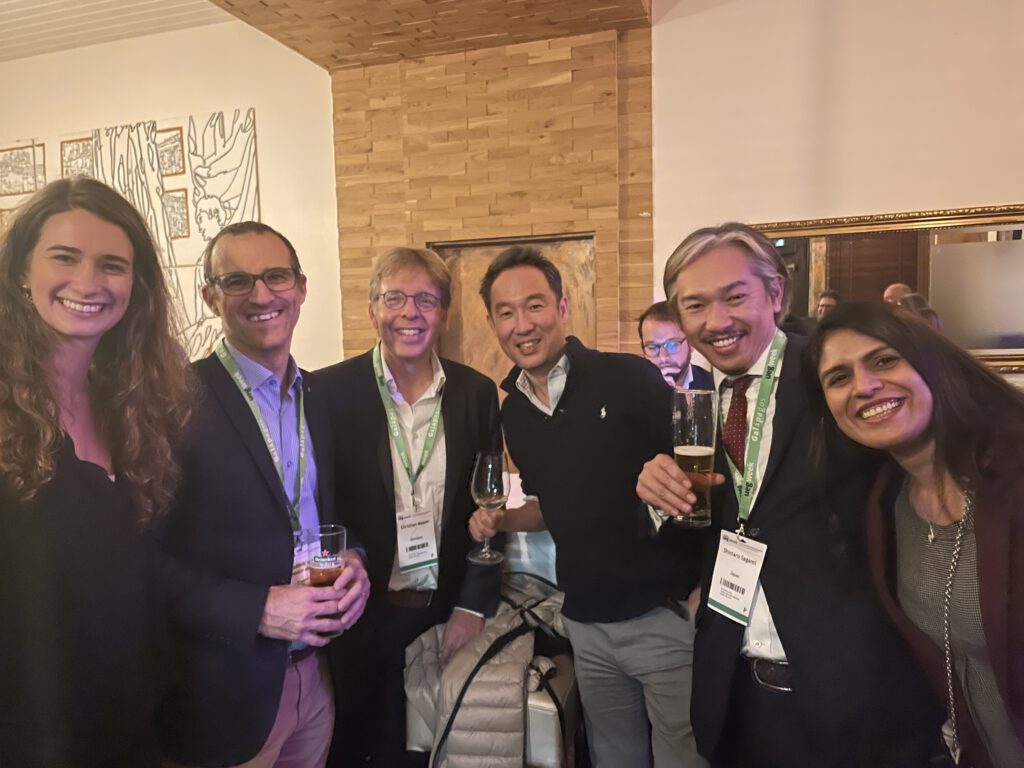